Jolla's CEO Antti Saarnio has bodly stated that Sailfish OS (Jolla) aims to be the 3rd major Mobile Phone Operating System, lining up with Android (Google) and iOS (Apple) in the future. After Jolla phone India launch we can see this journey in the beginning.

Anchors are lifted, Sails are up, but this sail might be a life long! Google Trends, site bringing us information of their search engine usage for any picked terms, is a great place to study the interest while no true market data is yet available. And there we can now see a fishy thing - Sailfish OS lifting up its nose during the past week. I wanted to share this view, as previously Jolla has been totally invisible in this comparison! 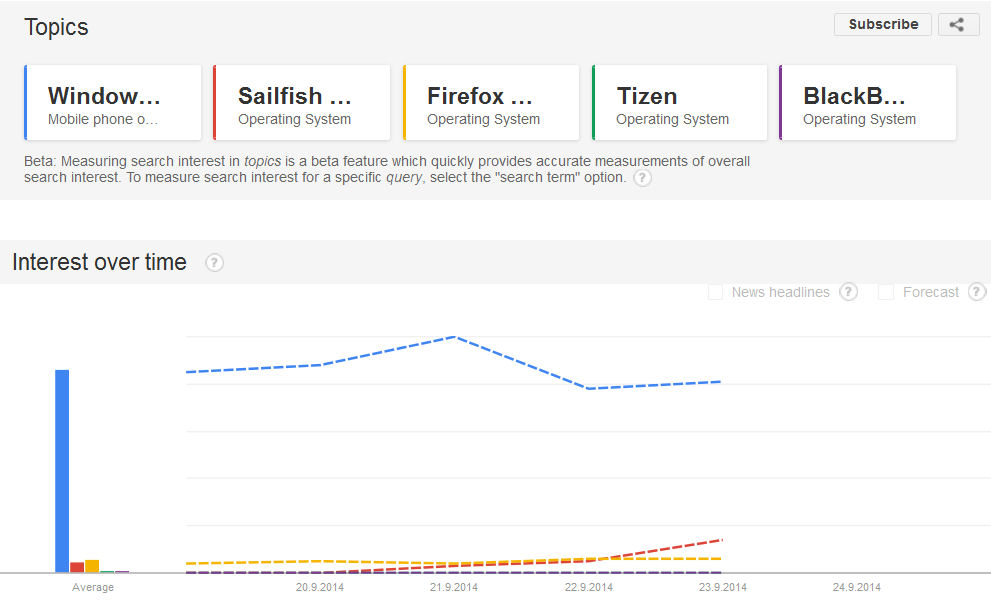 Above you can see the current 3rd, Windows Phone, and the four candidates who might want to reach it. Still high above all these five are Android (Google) and iOS (Apple), the two current leaders in the mobile OS market. Sailfish OS by Jolla has just raised it's nose on this chart, thanks to a launch with a huge retailer in India.

Earlier Google didn't have enough data to add Sailfish OS into this chart at all. This made me remember Saarnio's words, those bold and brave. Jolla aims to their goal, third major mobile operating system in the world, via the biggest mobile phone markets India (available since September 23, 2014) and China (Already available via a channel partner, but not yet officially launched). Jolla is, future wise, already gathering interest also in Africa.

Jolla's Head of Software Marc Dillon has also shared a word on the OS markets - In his opinion Jolla doesn't even compete with the current 3rd: Windows phone. However, chart above marks the bar to be reached, and the bar is set by Microsoft. How in earth a small startup can make it to port with this sail?

Windows Phone (Microsoft)
Sailfish OS (Jolla Oy)
Firefox OS (Mozilla Foundation)
Tizen OS (Samsung, Intel, Linux Foundation, Tizen Foundation)
BlackBerry OS (Blackberry Ltd)
All the candidates have a very small or unknown market shares. However, every 0,001% in these markets means a lot in mobile business with more than Trillion dollar revenue. Also worth a note is that it took 15 years for Blackberry to reach their current market share, and they are still far behind the TOP3. Blackberry has 12 700 employees (March 2013) while Jolla is still a startup with 125 (August 2014)

Editorial part - Hope you to disagree ;)


In overall, Saarnio's words makes one wonder if Jolla has some secret rocket engine in their boat, or is Mr. Saarnio retired before his talks are reality. To answer my own questions above, why wasn't it possible, with the right partners, with the active community, with great talents like Marc, but it might just take a while (30 years?). I'd prefer to see the rocket option, what do you think?

Jolla benefits on their Nokia background. There's a gap in the markets left by Nokia, and Jolla might be the best candidate to fill this gap. Is the Nokia background a rocket engine? Nokia ruled the market before Android, but decided to leave the whole mobile device business to other hands. If it was a rocket engine, they would have kept it. I'd say that Nokia offers a firm hull to this boat, but not the engine. Currently Nokia provides patents and mobile networks to the market, doing great with less work should I say.

Jolla benefits on their size - Mobile business is developing rapid, and a small company is capable to take the right turns quickly when needed. Also, they seem to have a clear view on what they are doing and they are focused on the port. In my opinion this brings a great helm installed into their boat, and binoculars to the sailors, but not the engine.

Jolla benefits on their operating system, as it's new, different, updated often, bringing an option to the customers. I've learned to value this high - high enough to make it the sails for the boat, but still not a rocket engine. Sails need the wind, and the wind, even blowing from the right point, is just too slow. We see this on Blackberry - a great OS growing slowly by their wind.

Ok, what's needed here? A storm! There is no engine, there are people. All the sailors (there's a reason why Jolla is calling all their customers the sailors as well) blowing to the same direction at the same time create a storm. Future of Jolla relies on the community formed of all their customers - The Sailors. We've heard it's sound as a whisper so far. Shout out sailors, now that Jolla is expanding it's very important to keep the blow in the sails. I don't like to see charts like this (Interest toward search term Jolla in Hong Kong, last 30 days)

You are a part of a rocket engine. Jolla knows this, but they still haven't told it loud enough. Contests, community meetups, different ways to thank people, clever ideas to make them shout your name out loud. And in this storm, both the negative and positive shouts are good - negative ones shows the rocks, the man behind the helm should be thankful for each shout.

Some people I'd like to thank, not in any order, missing a lot of great people:

Disclaimer: Unofficial post, don't take this too seriously. I'm not adding this kind of a disclaimer normally, now I did as I've been sharing mostly official stuff lately, to avoid any possible misunderstandings. Also note that Google Trends data is in Beta stage, and a seven day chart isn't an example of a trend. Just the anchors are up.