As the NFC bug will be fixed with this update, you can remove the temporary masking with this detailed guide. Masking can be safely removed either before or after installing the update.

Problems reported after updating the system

Another update named by a lake. There are at least 4 lakes named "Naamankajärvi" in Finland, located at Pudasjärvi, Kuusamo, Suomussalmi and Oulu. All of them are quite small, the biggest one laying at Kuusamo, 7 565 km2.

Jolla has stated that they are using lakes of Finland in naming updates of Sailfish OS. There are 187 888 lakes in Finland, including the small ones, so we might have more than few updates coming. Looking at the size of the biggest Naamankajärvi, we could speculate that this is not as big update than the previous one - but I'm still holding my breath for Sailfish Saimaa!

This post is for helping people in designing their own ambience backgrounds for Jolla. Knowing how Sailfish OS handles images or photos when turning them into an ambience might give you some advantage to create the most beautiful backgrounds.

While scrolling from screen to another, first thing to note is that the lower you go, the more Jolla cloaks the image - ending up with 100% cloaking in the 2nd launcher screen. Cloak is a partially transparent layer on top of your image, colored with the same tone as the text color which Jolla chooses from the image (see using greyscale images).

Second, let's take a look at the pixel limits for each element and screen. Ideal size for a background image is 540x1600px to take the full advantage of the partial scrolling of the background. In this guideline, top is considered as y = 0 and the pixels mentioned are counted from the top.

Pulley menu header, sized 540x113px, is visible only when the pulley menu on top is opened. If using e.g. a logo on this area, note that the first selection "Settings" is partially inside this area. When using a logo in center, leave it above 100px.


Lock screen image begins right after the header, showing area from y=114 to y=1073 (height 960px). The upper part of the lock screen area is also used as a background for the pulley menu (from y=0 to y=430). The lower part is shared with the home screen. Area not visible on the home screen begins from y=114 and ends to y=353 (height 240px)


Home screen image, y=354 to y=1313 (height 960px) is already cloaked strongly. Image is quite dark and toned with the text color, hiding any colourful details. The opposite colous (compared to the text colour) turns into grey.

Some suggestion based on these measurements:

Image above has a full size of 540x1600px. You can freely use it - click it twice to open it in full size, save it to your computer and use it as a background on your image manipulation program. You can also see how it looks like as an ambience background on your Jolla to see the measurements in action.


Share your Ambience designs or find great ambiences to your Jolla

You can already find a lot of great backgrounds, all in the right size (540x1600px). So far there are mostly pure images (without header/other special designs), but I hope we'll see some full designs soon too.

One of the most touching videos I've seen as a fan. SailfishOS is an operating system developed by Jolla. It's spreading to other smartphone models by experienced users, latest beeing Nexus 4. (Earlier seen on Nokia N9 & Nexus 7).


The story of Sailfish is just in the beginning - I wonder what will be the next conquer?

A device/program/app supporting DLNA can include a media server, a media player, or both of these. Media is streamed from the server to the player usually via WLAN network on which both the server and the player are connected to. Several servers and players can be included into the same network.


1. Stream from Jolla to your DLNA players

I've managed in this using Android App "Smart TV WiFi Remote + DLNA". It's a free app, no accounts needed either, and it works perfectly on Jolla too. Here's the Installation guide:


2. Using Jolla as a remote control
(possible at the same time when streaming media from Jolla)

As the DLNA Server on Jolla can be left running, you can use another Android App on Jolla at the same time, remote controlling your DLNA Player. There are several remote control apps available for several TV/Blueray/DLNA players, just check the Aptoide store for your model. I'm using Samsung BD-5500 as the player, so I installed app "Samsung Remote" to my Jolla. In this photo I'm streaming a video saved to my Jolla, watching it from my TV and remoting the playback with Jolla: 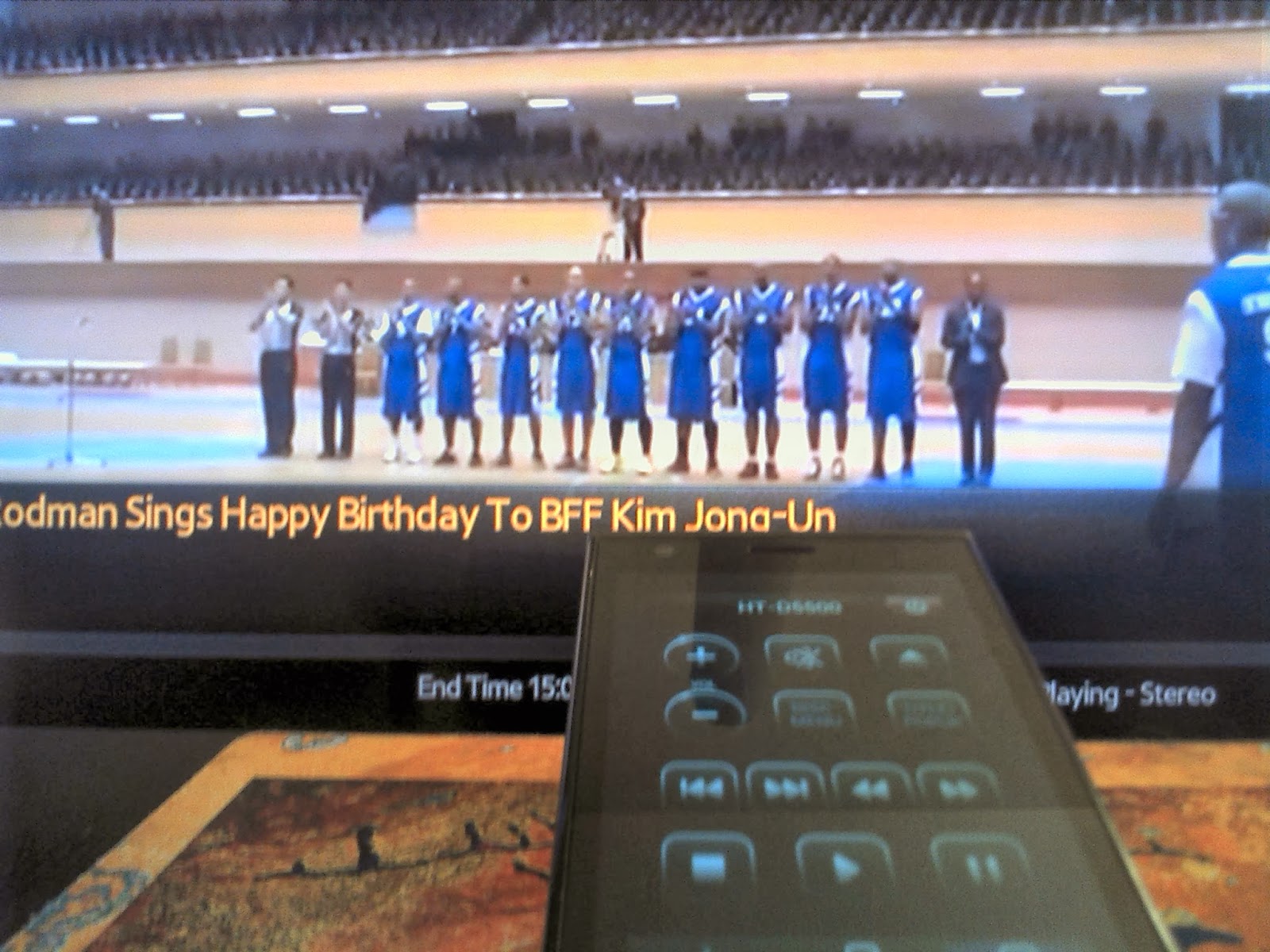 There are propably also other DLNA capable player apps which Jolla supports, but as I already wrote a review using Plex media server for this, here's an installation Guide for Plex:


4. Remote controlling Plex player on Jolla with another phone

While streaming media into Jolla, you can download a remote control for Plex to another mobile phone and control Jolla's playback from that. I succeeded in this installing an app called "Plex remote" to my old Android phone.
Tunnisteet: DLNA, Jolla, media sharing, video streaming 1 comment:

Plex media server works perfectly on Jolla Smartphone. Here's a review to streaming media from computer to Jolla's screen, use Jolla as a remote control, and use another phone as a remote control for Jolla's Plex player. Everything introduced in this article have been fully tested to work. Installing guide is not included. In this review we:

Plex software includes a backend media server (Propiertary sSoftware) and a frontend media player (OpenSource, based on XBMC player). Plex software (before version 1.0) can be installed for free on
From November 2013 Plex introduced version 1.0: Plex Home Theater. Latest version is available for computers running on Windows (Vista or later) and Mac (Snow Leopard or later).

Version 0.9.8 works on Jolla, via Android Support, both as a player (no Plex Pass or account required) and as a media server (to use, account and paid Plex Pass required). Without Plex Pass Jolla is capable to play any streaming media supported by the device (e.g. H.264 video format). Media server can transcode most video streams, audio streams and subtitles to supported formats in desired quality. Plex Media Server including the media must locate on the same network with Jolla (e.g. same WLAN)

Even more, I've installed a 3rd party remote control for Plex Player to another smartphone, so I'm able to control my Jolla from that. Maybe this doesn't seem too important, but it was required to fix the player screen size on Jolla: 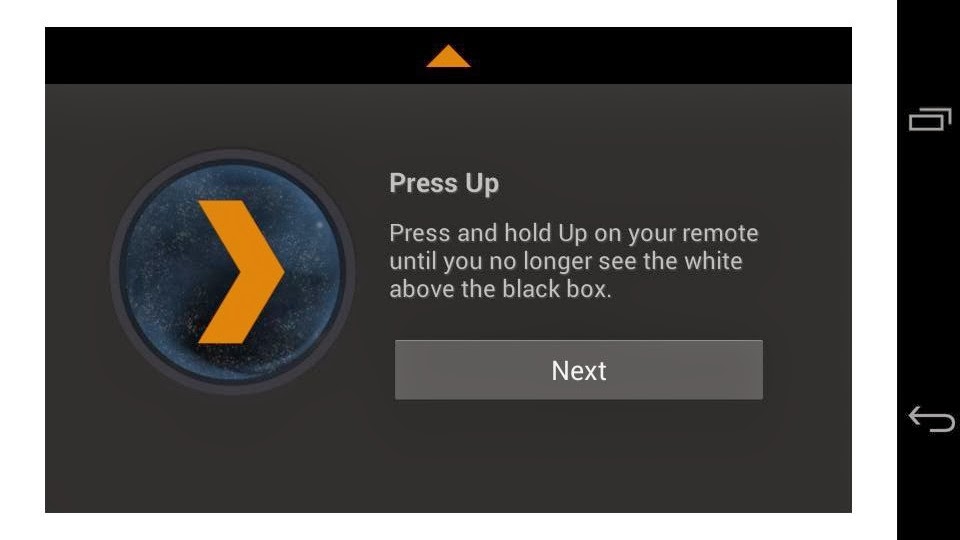 Screen overscan wizard is located on the Player Settings, and a remote control was required to adjust the screen. Using the touchpad of another smartphone (ZTE) I was able to adjust Jolla's screen for full use with the player. Some other settings on Jolla are shown below: 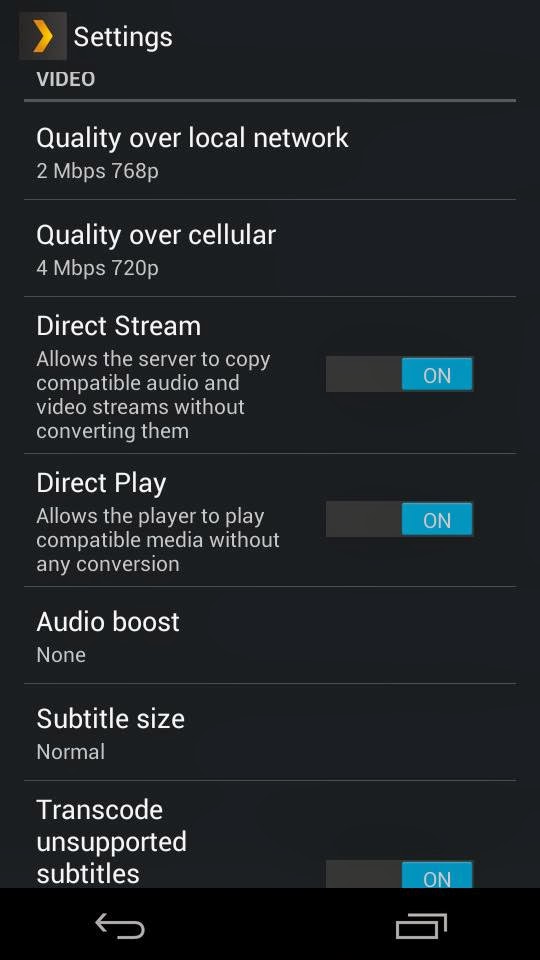 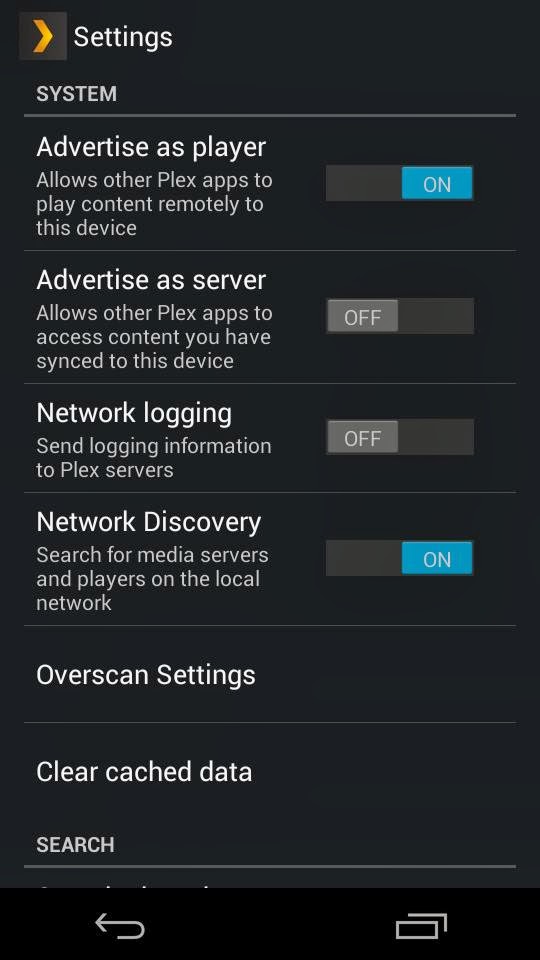 As you can see on the right image above, it's possible to select Jolla to be advertised as a server. I tested that, of course, and I was actually surprised that the Plex player on my BD was able to connect to the Plex Media Server on my Jolla. So, the server was recognized, but sharing Jolla's files seems to require sync option, and I haven't activated a Plex Pass to be able to use that. After enabling sync it would propably be possible to share files stored in Android environment (as Plex server is running under Android Support on Jolla).

Streaming video quality was absolutely great. I was able to strem 1080p videos over my WLAN network without any lagging. I did it just in testing purpose, streaming with this quality is useless as Jolla's screen resolution (540x960 px) has only a quarter of full HD quality (1080x1920 px)
Audio sync and quality were great too. For my first listening test I attached a DENON amplifier and a nice pair of Gradient speakers to Jolla's audio plug. I would have liked to test if Jolla would support any 5.1 audio stream too, but I was missing a suitable media for that. However, the stereo sound was absolutely fantastic.

Subtitles time sync isn't adjustable on Jolla's player, and as subtitle files are also transcoded when needed, it's pretty possible that some subtitles are in sync and some are not. My testing night ended to watching a movie in my bed with a nice pair of light Sennheiser headphones. In that one, subtitles were in sync too.

After watcing an 1h 30min movie, my Jolla had 25% less battery charge (screen brigtness at half). No lagging, no problems - everything seems to work as it should with Plex. I give this my full recommendation. 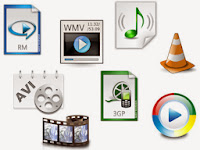 With Beta releases, it's sometimes just needed to do something yourself. This time, unless a fix is released, it has to do with the video recordings using Jolla's camera. There's a minor bug in rotation, turning some videos upside down (and some photos too), and there's another problem related to Jolla's less common video format h.263. Oh... and the recorded audio quality isn't great either (I hope the problem is just in the software)


Workaround for the rotation bug

When recording a landscape video, turn your Jolla anticlockwise (to the left).
This way the rotation angle will be 0. If you turn it right, the video will show upside down in your computer.

When sending videos to services like Youtube or Vimeo, the videos are automatically converted, and the file size & quality is reduced. No problem in here, if you're satisfied to the quality and the service.

Jolla records videos in format mp4v/h.263 (MPEG-4 Visual Simple@L6 to be exact). Not all players, and especially not the common web players are able to show this (you'll only hear the sound).

If you don't want to use 3rd party services, here's what you can do for the empty video frames and whining relatives: Convert your video to a better supported format. Here's a HowTo for mp4/avc1 format, which is well supported:


For converting a video, I used VLC Player. HowTo:

You can find your converted video in the Folder you selected earlier. The original video is left unchanged. The format of the new video is mp4/avc1 (MPEG-4, Advanced Video Codec High@L4.0) which is recognized by most web players and html5. Html5 supported browsers are at least Mozilla Firefox (from v21), Internet Explorer, Google Chrome & Safari. Opera does not support mp4 - to gain visibility there, convert video also to ogg format.

Sharing videos in mp4/avc1 format is currently the best way considering most viewers, as both the web and most players in several devices/computers support viewing this format. As an example, here's a 7 second teddy clip not using iframe or Java/Flash. The format is simply supported by html5 programming language. You shouldn't see this with Opera browser, but with most others, yes: 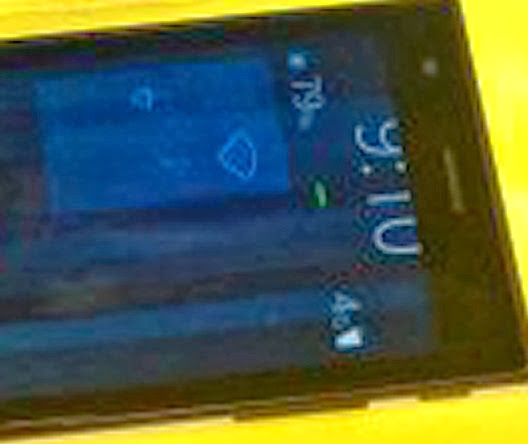 Jolla camera takes mp4 .h263 videos - which need to be converted to mp4 .h264 format for showing them in the web.

For testing the supported video formats in Sailfish Browser, I made a Short HD video clip with Jolla Smartphone. Let's see which is/are the working way(s) to upload a video and watch it using Jolla's default Sailfish Browser: