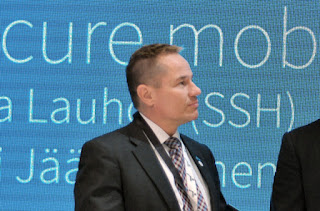 Finland, October 19, 2015:
SSH Communications Security is co-operating with Jolla Oy to provide a new secure phone into the privacy concerned markets. The first customers are expected to be found on public sector, followed by privacy concerned businesses and organisations. Schedule for launch is yet difficult to estimate due to possibly long testing period.

I was honored to meet Mika Lauhde, Vice President at SSH Communications Security (ssh.com) for the first time at Mobile World Congress 2015 when SSH and Jolla announced (press release) Sailfish Secure co-operation. This project has been on for 30 weeks after the announcement, and I'm happy to share an update to our readers with this short interview.

"All smart phone users should be aware of their communications security"

RJ: You introduced Sailfish Secure with Jolla Oy on March at MWC15, Barcelona, Spain. What steps have there been since that regarding this project?


ML: SSH and Jolla have worked diligently together since publishing the co-operation. Sailfish operating system has showed its unparalleled value when it’s been used as the base for the secure mobile operating system, and we’ve been able to make rapid progress when building the next generation secure phone.


RJ: To what is the security based on, in general, in a mobile operating system?


ML: In order to a build trustworthy and secure communication system, the base operating system shouldn’t  only be completely transparent for end-customer but also have a feature-set which can compete with all current high-end terminals’ feature sets. Sailfish OS is very robust platform to which SSH Communication Security has been able to build new kind of architecture for secure communication.


RJ: To what kind of customers the Sailfish Secure might be a considerable option?


ML: All smart phone users should be aware of their communications security. We see that the first movers on secure phone market are public sector organizations, followed closely by business and other private sector organizations. Jolla's and SSH’s secure phone is as usable as any smart phone, and would therefore be suitable to secure for any normal mobile phone users' every day communications.


RJ: Are we seeing a beta version published at some point, or is the product finalized as purely an internal project? If tested by outsiders, how are they chosen?


ML: Secure phone market, which is aimed for governments and corporate users, usually testing is done by purchasing entities. With other word as internal testing with internal use cases. If we are in some point able to go for outside testing, which is clearly have some advantages, is still open.


ML: This is very difficult to estimate due to the fact that both purchase and testing processes in this particular product area are often thorough and quite long.


RJ: Thank You once again for this update in the Sailfish OS secure phone project, we're really looking forward for the end result and we wish you and Jolla all the best reaching the project goals.

A "secure phone" (current internal name used at SSH) will sure find its markets looking at how other parties in the mobile industry are using closed source services. The biggest players are leaving their end customers unaware of how their usage patterns, locations, messaging or even microphone and camera might be compromised - a fresh newcomer developed in EU and implementing user privacy based on transparency of the operating system would be more than welcome.