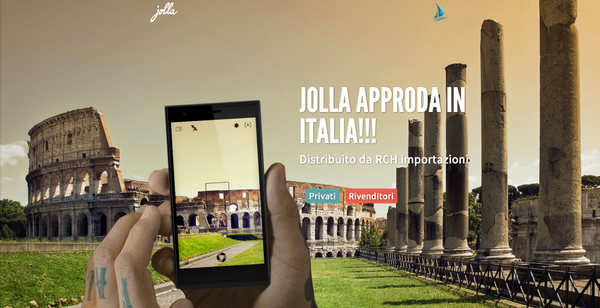 
"The lack of an alternative to the current operating systems has led to a continuous challenge on hardware specifications, leaving software innovation in the background. Jolla with its independent Sailfish operating system is bringing excitement to the world of smartphones."


The quote above is from Stefano Mosconi, Co-Founder and CTO at Jolla. This 36-year old engineer was born in Rome, moved to Finland back in 2005 to work for Nokia, and moved to work for Jolla soon after Nokia's mobile phone operations were sold to Microsoft. Stefano has done great job for both the company and the community, holding on to openness of the system and the communicating with Jolla's customers - I value this guy very high for this.

Jolla had a press conference / small launch event in Milano, Italy yesterday, officially launching the smartphone to Italian markets with distributor RCH Importazioni. The distributor has been active after July 30 when we first heard about them, and since then they've managed to gather more than 20 companies, or more than 40 shops as Jolla retailers all around the country.

With more than 20 companies Italy overcomes even Finland, the origin country of Jolla, in the amount of retailers - there are currently 18 known retailers in Finland. However, in this "contest" we are calculating only the amount of separate companies, and Jolla is also sold elsewhere by huge retailers like Amazon UK, 3 Hong Kong and Snapdeal. All together, Jolla has been expanding with great speed during this year. Here's a fresh list to all the retailers worldwide.

Back to Italy, I'd like to mention Jolla Community Italia fan site if you are interested on Jolla and if you speak Italian. The site founder Francesco Vaccaro also gave me a big helping hand in translating the official press release (below). Before that, one nice tweet from the event:

Milan, Italy - September 24, 2014 - Jolla Ltd., a Finnish company founded by a group of ex-Nokia employees, officially presented the innovative smartphone Jolla and its independent operating system Sailfish OS in Italy, now available in a growing number of phone shops across the country.


Jolla is the new Finnish smartphone with open source operating system Sailfish OS. Based on the legacy of Nokia and Meego, Jolla offers a completely new experience of use far from competing operating systems.


The distinctive button-less design, the navigation through natural gestures of fingers, the real-time multitasking and compatibility with Android™  applications, make Jolla and Sailfish OS operating system unique in the experience of smartphone usage.

The Jolla smartphone has a classic Finnish design - simple and bold in its purest way. With a simple, clean and elegant line Jolla adapts perfectly to the hand. The button-less user interface, based exclusively on finger gestures and optimized to be used with only one hand, provides an unmatched user experience. With its innovative real-time multitasking, Jolla is the only smartphone in which you're able to see all the running applications on one screen, without the need to open and close them.


Jolla supports Android™ applications, in addition of course to the native Apps on Sailfish OS, allowing users to use the most common applications in total freedom.

The Other Half: Make Jolla the other half of you!

The smartphone Jolla introduces for the first time an innovative combination of hardware and software, called "The Other Half". Using a specially developed cover, smartphone "dresses" and implements new features contained within the cover: fonts, backgrounds, sounds, user profiles and applications. Manufactured in anti-scratch ultra resistant polycarbonate, "The Other Half" is the soul of your Jolla, bringing you an unique experience.

The new smartphone Jolla Sailfish OS is already available in Italy in selected phone shops. For a list of retailers of Jolla in Italy, please visit: www.rchimportazioni.it

Jolla Ltd. is developing mobile devices and Sailfish OS, the open mobile operating system. The Jolla smartphone, powered by Sailfish OS, is currently available in Europe, Hong Kong and in India. Jolla was born in 2011 out of the passion of its founders towards open innovation in the mobile space, continuing the heritage of Nokia and Meego. The Jolla smartphone is designed and developed in Finland. Jolla Ltd. has offices in Helsinki (HQ) and Tampere, Finland and Hong Kong. www.jolla.com

RCH Importazioni Ltd is a company owned by the group NEST SpA, a company offering solutions to 360 degrees, with integrated consultative approach and proactive from the start up of the project to its full duration. And Jolla distributor in Italy.


Source: Press release in Italian by Jolla
Translation: Simo Ruoho, Review Jolla and Francesco Vaccaro, Jolla Community Italia
Reusage: Translated press release may be used the same way you would use the original press release, adding either a link to this source or the names of the translators in the footnote. Mr. Mosconi's photo in the news part is propiertary of him, but the text part in the news may be quoted and used freely.