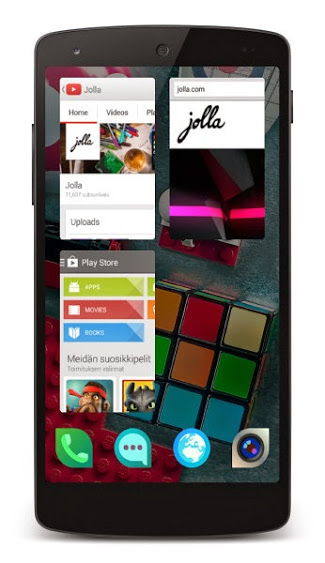 Originally Jolla Launcher alpha was shared via Google Play to 600 pioneers in a meaning to gather user feedback and bug reports. 13 000 Android users registered to the testing group.

By feedback from these pioneers version beta is to be released later for even wider group of testers, and hopefully in the end we'll see the first stable version running on most Android phones.

Update, September 17, 2014: The official Jolla Launcher was expected to reach beta stage during August to be released to 13 000 test users, but Jolla has been "cooking up something else". We're still on hold for the beta:


@hypnotoaded Jolla Launcher's production & launch schedules have moved a bit, as we have some other cool stuff cooking up - more news soon!
— Jolla (@JollaHQ) September 16, 2014

XDA developers, a famous hacking forum, shared an unofficial version of Jolla Launcher alpha, which should run on even more Android phone models. If you're using any version, please report your experience with this tool

Note that this is an unofficial alpha version for test use, it includes bugs and can affect on your phone's usability. Also, there are much less features than on Sailfish OS running on Jolla phone - This is a launcher, not an operating system. Launcher runs on Dalvik and it doesn't support ART. Visit this XDA Developers forum post for comments.

Jolla doesn't actually need more alpha testers, so please don't fill the TJC portal with new bug reports when using launcher downloaded from other sites than Google Play. Instead, please use this DIT tool for reporting.

You're welcome to try it, Jolla has nothing against hacked versions, but install and use it in your own responsibility. There's no support from Jolla for these versions, but you're welcome to read reported issues on TJC. Here are Jolla's release notes for the official version available to registered alpha testers. Note that any unofficial versions might contain more or less features and bugs. We hope you enjoy the Sailfish OS alpha launcher experience, but once more: It's far from ready! For the best experience visit jolla.com

Great video, thanks for sharing! Ali V.G via YouTube

13 000 Android users registered to test group hoping to get Jolla's Sailfish OS experience on their Android phones. Jolla closed the registration early and delivered Jolla Launcher alpha to 600 of them. The launcher app was told to work on Nexus 4, Nexus 5 and some other Android phones running Android 4.3 or later.

It's assumed that all 13 000 people and even more gets their Google Play link for downloading the launcher when the project is ready for beta testing phase, probably in the autumn.

Alpha version test group are reporting their issues and user experience at together.jolla.com, tagging their posts with "jolla-launcher". See the search result