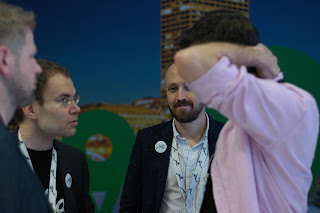 Tampere, Finland, November 19, 2015: Jolla in economic difficulties, more than half of the employees laid off.

News was originally shared in Finnish by Aamulehti and confirmed by Juhani Lassila, Jolla Oy.


"Based on information received by the Aamulehti from a variety of sources, Sailfish OS operating system developer Jolla Oy has plunged into financial difficulties. The company will therefor start extensive lay-offs, which are informed today.

More than a hundred employees have been working for Jolla. Juhani Lassila, Head of Communications at Jolla, confirms that more than half of the employees have to be laid off. According to Lassila, delivery of Jolla tablet devices to customers is intended to ensure, despite the difficulties. Lay-offs does not include the key persons.

"We inform about the changes in the economic situation soon. We have been going on with a round of financing, which was supposed to expire in November. It has had delays", says Lassila.

For the years 2014-2015 Jolla has had four payment default entries for a total amount of approximately EUR 10 000.

Entries were charged by Intrum Justitia [collector], the Unemployment Insurance Fund [governmental fund] and the Suomen perintätoimisto [collector]. According to the payment default registry, the fees were collected except for one: Decrease of 500 Euro for the year 2014 for unemployment insurance fund is still outstanding.

Head of Communications at Jolla, Juhani Lassila, says that he is not aware of payment defaults."


Considering such a large lay-offs in a software company, we are looking at a situation where only the essential parts to keep the software alive are expected to be left in house.

First offices to drop would without any doubt be everything hardware related like design and customer services (excluding required personnel to handle warranty cases), the marketing team, the software design team and the testing team. This is, of course, speculation, and it continues:

Last parts to hold onto would obviously be a bug fixing and coding team, the legal department and the key personnel to handle the financial issues, hopefully to be solved later. Antti Saarnio has said on September that Jolla would need another big partner within the next 6 months (additional to Intex).

For the Sailors under lay-offs, and for the community, this is of course sad news. There are now a lot of people looking forward for new opportunities, and those active in community are balancing between staying in as supporting Sailfish OS or moving on. The issue that Sailfish OS isn't open sourced yet might play a role in engaging the community as well.

What's your plan? Standing up and shouting out loud for the future of Sailfish OS, saying "I told you so", or silently moving on?


Comments by Antti Saarnio, Head of Jolla, on the following day