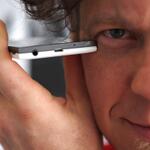 Is this the new Steve Jobs?


Norwegian published an interview with Marc Dillon, Co-founder and Head of Software at Jolla Oy. The article doesn't tell when the interview was given, and the only new pick I found is that Jolla is heading towards direct sales also in Italy. But this is what Marc Dillon said that I liked the most: “This is the world’s greatest mobile community”


What’s the big idea? Jolla and Sailfish.
What’s that? Jolla is a young Finnish company taking on the mobile industry. Last year they launched the Jolla phone, a new smartphone that utilises a gesture-oriented user interface, and Sailfish, an open-source operating system intended to offer a competitive advantage against Google’s Android or Apple’s iOS.
They’re taking on Apple and Google? Seems risky! But it could be a good move. “There are only two huge, dominant players in the mobile market at the moment: Apple and Google,” says Jolla co-founder Marc Dillon (pictured). “Could you imagine if you only had Toyota or Ford to choose from? It’s completely unrealistic for consumers. It’s also unrealistic that a device manufacturer only has one choice of operating system – Android – they can pick from, as they are limited by how much Google will let them innovate. Our strength is to work with partners in parallel on open-source software.”
What’s the Nokia connection? Following Nokia CEO Stephen Elop’s infamous 2011 memo, in which he compared the company to a “burning platform”, it was announced that Nokia’s MeeGo operating system was no longer part of the company’s long-term strategy. “The MeeGo team looked at ourselves and our experience, and we realised we had the people and knowledge to take these raw materials of hardware and software, and make a finished consumer electronics device as highly integrated as a smartphone.” The team took advantage of Nokia’s Bridge programme, which offered ex-Nokians funds to help establish tech start-ups, and Jolla was born (alongside more than 400 other companies from ex-Nokians).
While Sailfish is a direct successor to MeeGo and Nokia’s N9 mobile phone, only its software is based on the open-sourced components of MeeGo – the user interface design for the devices had to be developed from scratch.
What does Jolla mean? “Jolla” is a Finnish word that translates as “dinghy”. “It was originally a joke,” says Dillon. “Jolla was rescuing people from Nokia’s burning platform.” The Sailfish operating system is another nautical reference, named for the fastest fish in the ocean.
What’s the difference between a Jolla smartphone and other smartphones? “We have something fresh, fast and efficient,” says Dillon. “It gives you ways to use your phone you’ve never had before.” The phone makes use of an intuitive gesture-based interface, rather than buttons, to operate, so all functions are controlled by “swiping”, “pulling” or “peeking” gestures using the touchscreen. They are features that are familiar from other operating systems, like Apple’s iOS, but with Jolla, there’s no forward facing button. There’s also a design focus on being able to intuitively orientate the phone without looking at it.
The cost is a big plus – it’s only £317 (NOK3,165) compared to the £550-plus iPhone 5 or HTC smartphone. The biggest difference, though, is how customisable the phone is, thanks mainly to a feature called The Other Half.
What’s that? Essentially it’s a “smart” cover for the phone – plug in a different cover to instantly change the phone’s appearance and ambience settings. A recently released Angry Birds-themed cover, for example, gives users access to special ambiences, sounds, images, and videos. Jolla has also released the files to 3D print The Other Half, meaning anyone with the right know-how can customise the cover to do whatever they want.
Sounds cool. What are the possibilities? Anything from solar panels for charging the phone to medical sensors that interact with apps. “Anyone can develop something for The Other Half,” says Dillon. “But, we do have a separate agreement for commercial development.” The same goes for Sailfish, which is available for free download from the Sailfish OS Wiki with installation and coding tutorials.
Why go open source? “The ability to build something that is bigger than you or your team is what appeals to me,” says Dillon. “There is always someone in the open-source community to help you build what you’re working on.” For example, when the Jolla phone was first released the team hadn’t had time to develop a tethering app to allow another device to connect to the phone’s WiFi. A member of the Jolla community developed the app, put it in the store for free and Jolla is integrating the app into the next version of the phone. “That’s the kind of people we’re dealing with here,” Dillon says. “When there is a problem, they just go ahead and solve it.”
How big is the Jolla open-source community? “This is the world’s greatest mobile community,” says Dillon, although he is unsure exactly how many active members there are.
Who’s buying the phones? He won’t give sales figures but according to Dillon everybody’s buying one – and in Finland they outsell iPhones. “Our customers are from all walks of life,” he says. “There are grandmothers, tech kids, and various professionals, all of whom have picked it up and love it.” At the beginning, though, Jolla focused on “early adopters” – people familiar with adapting to new technologies. “It’s a brand new platform,” says Dillon. “People forget what the iPhone was like five years ago.”
So, what are people saying? As many reviewers stress, the Jolla phone is still very much in beta stage so it’s not really the phone for everyone – but it certainly looks like it has a promising future.
What’s next for Jolla? In February, at the Mobile World Congress, the Jolla phone was relaunched for the global market, there’s also an office in Hong Kong, and direct sales about to launch in Portugal and Italy. As for software and hardware, there’s a Sailfish update planned each month and a focus on continuing to add value to The Other Half. “The most important thing is to keep delivering and working with the community,” says Dillon. “We’re making it very clear we’re here to stay.”