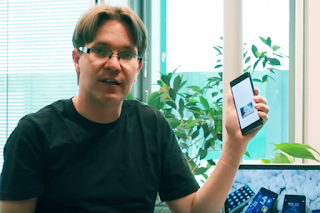 There are actually two options: An official Sailfish X 2.1.3.5 Kymijoki released by Jolla, and an unofficial Sailfish OS 2.1.1.26 Jämsänjoki available via community. Additionally one could make his very own, using a public hacking guide made available by Jolla.


Sailfish OS user interface has been developed for 5 years and it has received 23 system updates so far. The OS is mature, but it's not ready - be prepared for some bugs. You'll find it intuitive and easy to use after some time, and you'll enjoy having your other hand mostly free while using the phone. You might enjoy having some new Sailfish apps to try, and with official version the huge amount of Android apps out there. However, be prepared that Android apps dependent on proprietary Google Play Services might or might not run. For example the latest version of WhatsApp has issues in video playback, while the app otherwise runs all right. Android apps are installed vie 3rd party stores like Aptoide or F-Droid instead of Google's proprietary Play store. Sailfish apps are installed via preinstalled Sailfish store or via 3rd party repositories like OpenRepos. Both apk's and rpm's can also be installed via a GNU/Linux terminal:

If you're familiar with Linux, you'll most likely enjoy the developer mode (activation requires Jolla account, available on both official and unofficial version) which brings a GNU/Linux terminal right on your device. It has pre-installed basic user (nemo) and developer root user (devel-su). These will make about everything possible for you, and in need to dive real deep, installing full root access (su) is of course possible. As an example, installing Nokia's mce-tools adds easy hacking options even for customizing your LED or hardware buttons.

You'll miss the highest camera resolution and all the trademarked features in the camera like smile-recognizion etc. (The camera will utilize 16MPix). You might also run into issues with bluetooth: You might be unable to sync your phonebook with your car or transferring media (audio) to certain receivers. Bugs include having pairing issues. But for example the most Bluetooth headsets are just fine with phone calls, and higher quality audio (above mono 8) streams just fine for media as well. You'll also miss some sensors which are not yet supported in this version (step-counter, fingerpring sensor, barometer), option to tether, and you won't have FM-radio. Buttons integrated to audio headsets works with native Sailfish audio apps but do not work with Android apps. Additionally, Sailfish X does not utilize all 6 processor cores too well yet. For example Antutu benchmark scores 45 compared to 75 on stock-OS. It's also been reported that some apps utilize only one core while letting all other cores rest at 0%. This might also affect battery consumption. Jolla is, of course, working full time to enable better support in each of their system updates, and those should be rolling in for users with just few months gap.

You'll probably find yourself being a member of TJC (together.jolla.com) at some point, joining a quite nice and helpful user community. There, Sailfish OS users help each other on any problems and might offer great workarounds for all kinds of issues. The community includes skillful hackers, ordinary every day users, and even some of the Jolla employees are active there. It might seem messy when first joining, but you'll get used to the idea pretty soon.

So is it worth it?


Looking at the list of missing features at this point, I'd guess many might hold on until the next system update. At current stage, the switch is more for GNU/Linux enthusiasts and developers. However, the gesture based user interface does add the value, but is it enough to cover all the "losses"? One of the gains is getting rid of proprietary Google services and ads, both important for privacy oriented users. If you're not sure, I suggest you try an unofficial community ported version, get familiar with the user interface, create a Jolla account for yourself and try a few native apps. If you find that experience nice, upgrading to an official version will add the 3rd party services (Android app support, MS Exchange Active Sync, Text prediction) and you'll be supported also directly by Jolla, instead of the community only.

However, despite the missing/buggy features, the community has been pretty satisfied with Sailfish X so far:


Your data like location history, contacts and internet browsing habits are no longer automatically transfered to Google if you switch to Sailfish OS. According to your new terms, Jolla will gather anonymous user data, carrying a promise they're not sold to any 3rd parties. If you want to use developer mode, app store or have system updates over the air, you need to provide some credentials while activating your Jolla Account. Android apps can be prevented from accessing your contacts or photos. Android apps are also restricted by default to access your phone or messages, so there's no risk of them making phone calls or sending txt messages (you'll actually get warned if they try to). This is especially nice for users who install apps from unknown sources.

Sailfish X is not allowing apps to advertise. You'll get rid of popups and notifications used by some Android apps, accessing your system notifications. The default browser is open source code, so anyone can audit how the browser actually handles your browsing habits. There's no adblocker, however. Another native browser "webcat" is also worth a test. On the official version it's possible to install any of your desired Android browsers.


Sailfish X supports some VPN and some MDM features. It doesn't support fully encrypted storage space or sandboxing apps - but somehow it can be seen as a little sandbox by itself while being less known. In theory, Sailfish is vulnerable similar ways like any Linux distribution, having most important vulnerabilities on Kernel level (and blocked via Kernel updates). This is similar to Android, but while still being a minor player in the mobile OS markets, there are no known security breaks yet on Sailfish. Jolla updates their kernel version on regular bases. Some vulnerabilities might be fixed later than on Android just due to a smaller team. As an example, the latest version (2.1.3.5 Kymijoki) is not vulnerable to Blueborn CVE, while the community ported version hasn't got this one fixed yet.