Jolla News: Market share Q4/2013 and a view to the future of Jolla phone 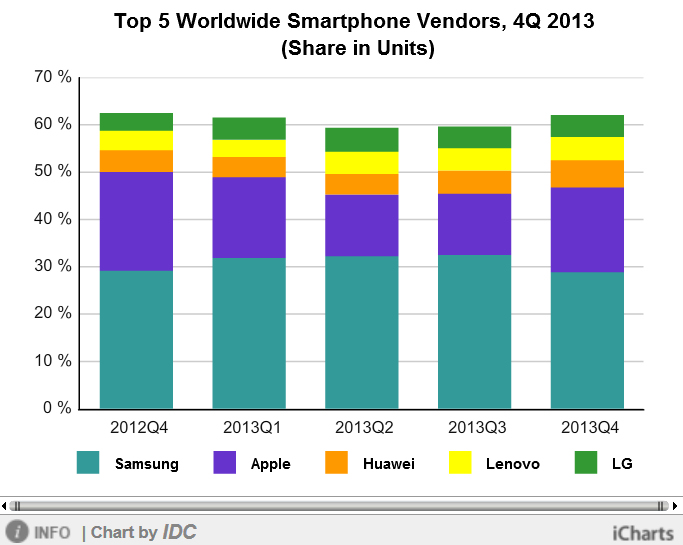 AOSP (Android Open Source Project) with 25% at Q4/2013 has a huge gain compared to year back. These phones (forked Android) are mostly sold in China, India and other parts of Asian markets. A great deal of these phones have Android versions which are still using Google services, but back in October 2013 Google locked their Google Play service from forked Android phones (e.g. Kindle). Apps developed on Google API and dependent of Play services are not working in these phones any more.

Android support on Jolla is independent of Google Play services, but more and more apps developed on Google API are dependent on these. Due to this, Jolla owners might face a problem in close future - future Android apps developed on Google API will not run properly, and users are forced to hunt older, working versions of their desired apps. I might have encountered this already while updating Navfree - last working version seems to be 2.1.14

It's obvious that it's not in Google's interest to enable their apps to run on any other platforms but unforked Android, and the 4% loss in their market share of native Android can already be heard as a sound of alarm for them. It's possible, even probable, that the support outside Google's Android is  getting even worse in a long run.

While all this we should be extremely happy and excited about each new native Sailfish OS app reaching Jolla Store. The phone is the cake, but it's not much without great apps decorating it. On behalf of our community I want to show some respect for every single app developed:

Starting soon, this blog will review as much Sailfish apps as possible. My first app review was IRC for Sailfish, but let that be just a beginning. As the amount of apps is growing, I also wish to welcome app reviews written by others to be shared here, please contribute for this common purpose and shere your respect with nice, yet honest, reviews.

Also, you will not find any more Android app reviews on this blog. Those already written (Go Launcher EX, Navfree, Plex, Flash player) may stay, as well as the App report tool where you can still share your experience from both Sailfish and Android apps (see Community DIT). In overall, this blog takes a turn towards Sailfish.

Sailfish OS will surely gain its independent market share in time, and while Google reduces their support outside native Android, Jolla has no idea to advance with its Android support in a long run. While the amount of native Sailfish apps is small, Android support remains as an important part of Jolla - especially in entering markets in Asia.

I wish that both Jolla and our great community will give their full support, in many different ways, to all Sailfish app developers - this has a first-rate importance.
Tunnisteet: android, AOSP, market shares, mobile, news, platform, Sailfish