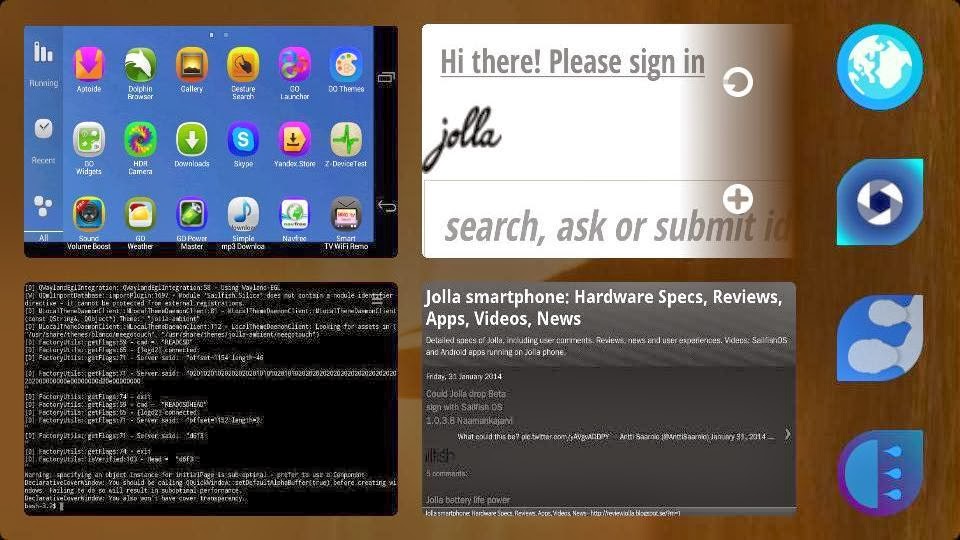 Sailfish OS 1.0.3.8 Naamankajärvi: This article introduces the latest Sailfish Operating system on Jolla smartphone, released by Jolla 31-Jan-2014. Article includes a review to the User Interface and couple of most used pre-installed apps, extended with all gestures used on Jolla smartphone. Article was published just a couple of days after 1.0.3.8 was out (short time experience).


1. Sailfish, the key factors against competitors

Jolla phone is powered by Sailfish OS, a Linux based system developed by Jolla. Sailfish OS has a longer history, it's developed from Meego (used in Nokia N9) in cooperation with OpenSource MER project. Nokia dropped Meego and it's developing team when Nokia started to use Microsoft software. The team was still exited about developing Meego, they saw its potential. Knowing it wouldn't be further developed by Nokia, company Jolla Oy was founded, and developing if both the Jolla phone and the Sailfish OS have been going on since 2011. Jolla has been updating Sailfish OS all this time, new versions have been published monthly. Latests one, 1.0.3.8, was delivered to the customers 31-Jan-2014.

In Jolla, there are no surface buttons and all interaction is based on gestures. This supports Jolla's idea of developing an OS which can be used in multiple devices, not only smartphones or tablets. In Jolla smartphone most of the gestures can be started from any location of the screen, fitting your hand too. The used gestures in Sailfish OS environment are:
The phone is fully usable with these gestures and without touching any buttons (except for powering up / shutting down the phone). Power key and volume keys are the only buttons on Jolla. Volume button can be used to take a photo (an option to tap).

20 gestures story, introducing the most of the user interface

As told, using Sailfish is based on gestures. I find it best to describe the user interface with a storyline, describing the screens and optional gestures on the way. This is how the phone is used - the content and the gestures just can't be separated. Moving from screen to another happens via transparency, and pull & swipe gestures can also be used to just peek the next screen - sliding your finger back the view you were about to see disappears again. By the way, all this takes a while to learn, but Sailfish user interface is actually very intuitive. After getting used to Sailfish, other UI's feels a bit... inelegant? But now, let the journey begin. Each gesture used is numbered:

1. Double tap in anywhere of the blank screen wakes the phone up.I'm at lock screen, watching the time and some icons telling I have some new notifications. Now we must hurry... lock screen shuts down in 5 seconds.
2. Short pull down, starting from anywhere in the screen. I'm in a meeting, so I quicly silence my Jolla via a pulley menu. I could start a camera too from there.
3.-4. Swipe left and tap. I enter my favourite ambiences selection screen and change my ambience to one of my favourites. The background, text colors and different notification sounds ant the ringtone are changed. I'm back on the lock-screen.
5. Swipe up. I saw on the lock screen that I had received a message, so I opened my notifications screen.
6. Swipe up again. There were no important notifications at this time, so I didn't tap any. Instead, I just closed the screen, and this is just another way to enter home-screen from notifications.

At home-screen I can see my favourite app icons (4) on the bottom and active covers (max 9) for my running Sailfish apps. One shows the latest one of my running Android apps. Android apps are forced to share just a single active cover.

7.-9. Tap on one of my favourite apps, player, and two more taps there to start playing one of my albums, saved to the phone in mp3 format.
10. Swipe-left. I drop the app to the home-screen. It's now running in a small screen called "active cover", and there seems to be a couple of gestures attached to it too.
11. Pull-left on the player active cover. I change to the next song. Another option would be pause.
12. Flick-up. The most used gesture again, starting from anywhere on the screen. This way I quickly enter my launcher-screen. Changing between screens seems very responsive, scrolling is fast.

Suddenly the music fades out and a nice, soft sound tells me I've got another message. The music fades back in. I was just about to download some more music with an Android app, but now I decide to check the message:

13. Swipe-up, familiar gesture to enter notification-screen, available from about anywhere.

There it is - one new FB message. Next to an icon I can see the sender and the beginning of the message, and the time passed since when it was sent. Other things shown in the notification screen are e.g. system-messages and transfered files. There are also big icons to enter FB and Twitter in Sailfish browser view.

14. Tap on my friends message. It opens the Messages app, a pre-installed part of Sailfish OS.

SMS, FB, Google, and XMMP are all integrated into the Messages app on Sailfish OS. Actually I don't consider it as an app at all, more likely a part of the UI. It's most usually opened via an incoming message. Here we can see an important part of the Sailfish OS - opening an app might bring few circles to the top of the screen. They tell that the app has more screens, scrollable with flick-gesture, or optionally, tapping the circles. I always use the flick. A highlighted circle shows on which screen you are - at the moment, on the second screen of Messages App.

I read the message and decide to answer. However, a small grey line is showing that my friend isn't online at Facebook any more... But Sailfish offers another option:

It took me six gestures (+writing) to open a facebook message and to answer it with a Google talk message. Not bad at all :) After sending, the message app stays open, looking forward if my friends answers.

19. Swipe left. I drop the app to the home screen. Music was playing all the time, and it's still playing nicely, cover showing the album image. Latest app "Messages" is opened to another active cover, showing my latest three activities with my contacts. Oh, and I'm back on the home screen again.

20. Tap on my most favourite app, People.

This best part of the UI is yet without introduction, and I saved it as the last. In the 1st screen (let me call it People search screen) I have a view to my favourite contacts, all recent messages and to the alphabets. Coloured line on top of the screen teels that there is also a pulley menu. So, here are all my contacts.

21. Pull down to open search. Fastest way to enter a contact card when you have several contacts.
22. Tap the name which was found (after writing a couple of letters). Now I'm in the contact card (People app, 2nd screen. After a minute, the screen was shut down and the phone was locked.

Oh, 22 already? This is so much fun I just can't stop going on. But now I do that.  With just 20 gestures, I managed to:
I'm wondering how many gestures I would need with other phone models for all this... Could someone do all the above with an Android, and count the gestures (including key presses)? By the way, there's one lie included in my story. Jolla users: can you find it?