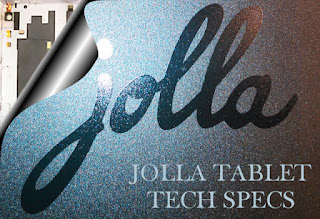 Disclaimer: The extended specs are gathered from several sources listed in the end of the post. For the official specs, please refer to jolla.com/tablet

Note: Photos below are taken at MWC15, while Jolla Tablet display was yet without full lamination. Display was later changed to one with similar specs and full laminate. Display specs written are already up to date, and new photos will be added later.

Features worth a special mention on this tablet are its display and awarded buttonless user interface, powered by mobile operating system Sailfish OS.

The award "Best of Mobile" was granted by Trusted Reviews on Mobile World Congress 2015, Barcelona, Spain. Out of all new tablets introduced on the venue, Jolla Tablet was selected as the best one.

* Camera supports face detection on hardware level, but Jolla has not yet informed if they are taking this feature into use

** Hardware supports 1080p/30fps video playback, but recording could be higher (earlier informed as 60fps by email from Jolla)

* Instead of using power button, screen can be locked with an accessory cover supporting hall sensor, or using top-swipe gesture and selecting a lock icon. Power button is needed mostly for turning the whole device on and off (press for longer than 3 secs).

** Volume can also be adjusted with three-finger-swipe gesture, up or down. This works on top of any application, so the volume button is actually not even needed. Volume buttons works also as camera shutter when camera app is in use

GPS
* Sailfish native apps for Maps / Tracking are available. Turn-by-turn voice navigation should be possible with some supported Android apps.

"On mixed usage pattern, having display on with full brightness for 1 hour and having WiFi on all the time, battery lasted for 15.5 hours" (TM)

** OTG (On The Go) standard enables host devices, for example mobile network dongles, to be used via USB port. This feature is not yet enabled on Sailfish OS 2.0.0.10

* Hall-sensor requires compatible accessory cover (not included). It enables turning the display off with simply closing the cover


Sailfish OS is rather new operating system, developed for mobile devices only. It's usage is based purely on gestures. It's an independent Linux based operating system, and developer Jolla Oy has a strong focus on user privacy.

Current architecture includes both open source licensed and proprietary parts. Jolla has plans for more open source licencing, but last news on that were shared on May 2015, situation on hold, so looking for an update.

Sailfish OS user interface and features are updated regularly via system updates over air (requires active Jolla account). So far this OS has received a new system update every 1.5 months.

Amount of native applications for Sailfish OS is still limited and under development.

App security: While Android apps are run on top of Sailfish OS, not all resources of the operating system are available for them. Android apps are, for example, not able to make phone calls. Sailfish OS will take over if they try that, and permission to launch Sailfish Phone app is first asked from the user. Access to personal data, like your contacts, is also denied by default. Sailfish OS has settings to grant individual apps some more rights.

More on Jolla Tablet hardware? Comment with your question, let's find the answer together