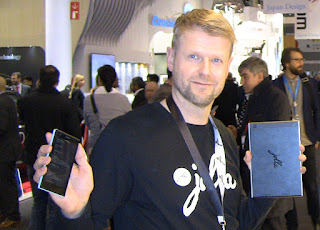 Originally shared by Kauppalehti, a Finnish business magazine, this Jolla Tablet video is the first to present the device in its final hardware. Check the colors now, on the fully laminated Retina display, and hear what Jouni Mikkonen, corresponding R&D at Jolla Oy has to say about it. In the end, some more news Kauppalehti shared in Finnish from a press conference today at Jolla.

Original interview: Perttu Räisänen, Kauppalehti (Finnish article)
Subtitles: Join translating to your language on Transifex. Thanks to Jolla España and Jolla Community Italia and everybody else for their efforts for your subtitles


Jouni's introduction in short, not an accurate translation:

Jouni first talks about the horizontal navigation carousel, presenting home screen, quick settings on the Notification screen, and tells about the Partner Space as the third part of the carousel, not visible on devices shipped to Indiegogo campaign participants.

Then he opens Facebook (Android app), telling the Jolla Tablet support Android apps as well, and shows how any running apps are dropping back to the multitasking home screen with a simple swipe. Below the home, Jouni presents the application grid, and then he shares how to lock the device either via lock menu on top, or using a lock button on side.

Interviewer asks about the hardware and competitive aspects. Jouni mentions especially the Retina display and tells about the introduction of the Jolla Tablet at Mobile World Congress, Barcelona, and the award "Best of Mobile" for Jolla Tablet, considering it was achieved mostly because of the unique user interface. Jouni himself finds the following sweet spots on Jolla Tablet, in the marketing point of view:

But as the most important one, he mentions the user experience. In the end, interviewer asks about security of the device, and Jouni begins with telling the security starts from fully open source OS:


Interviewer: You have highlighted the security on this device, so what kind of security features does it have?

Jouni: Well, first and foremost, the security starts from that this is a fully open source operating system, so that anyone may review it and verify it, and thereby see there's nothing to hide. And so the security is to be built on transparency. This is perhaps the simplest explanation at this point to your question.

Note: It's not always straight forward to translate Finnish from spoken words. How I understood Jouni's words, as a Finnish native, is that the security will be built on openness when Sailfish OS reaches that stage. Note also that not all parts can be opened, as some parts are commercial, owned by 3rd parties. Please refer to the latest words by Juhani Lassila and Antti Saarnio on this post to know where Jolla currently stands on this.