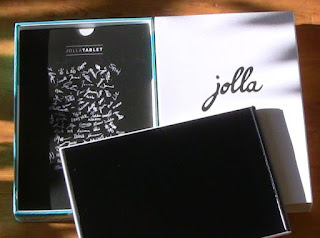 Jolla tried to deliver more tablets, now sold by others on Taobao

After Jolla's financial situation was partially resolved in December 2015 they did their best to deliver more slates to the Jolla Tablet campaign participants on Indiegogo. Jolla got 540 more, missed 400 slates already sold to others, and had to promise almost 10 000 backers a refund in two portions. Juhani Lassila from Jolla was very transparent on the China situation when I asked about it.

Jolla Tablets in China - details on the Indigogo campaign

My friend Tyler in China shared an awesome follow up post, I might even call it "Jolla Tablets in China part 2". This post has highly unofficial status, which is also clearly stated there, but it's a great insight on the availability and current status. Using the Sailfish OS flashing tool linked there is purely on your own responsibility, security is round zero (unknown) on that, but the post itself is definitely worth a visit for it's informative value.

Part of the tablets sold via Taobao are Aigo x86 Tablets in Jolla Tablet covers - having different operating system and hardware, and not a safe buy. I've edited a couple of pics for a comparable view, and you can see a huge difference already in the motherboards:

Indiegogo campaign launched for Jolla Tablet back in November 2014 was a great success. Jolla received 2.5 M$ from backers and was about to deliver 10 000 slates added with couple of thousand more for later pre-order customers. But things don't always go as planned.

China was originally also part of this campaign, but due to licensing reasons Jolla needed to drop China from the list. There were not many backers there, and they were offered a refund on spring 2015. Jolla's "little sister" Aigo X86, another quite similar Android tablet sold in China since February was not related to this, according to Juhani Lassila, Head of Communications at Jolla

The similarity comes from factory design - smaller manufacturers save in expenses by selecting their design from an assortment offered by the factory. Jolla picked their hardware, colors, and of course added their unique software to differentiate for Finnish design.

During 2015 the campaign suffered from several delays both due to issues in the Chinese hardware parts and changes of factories in China. Schedules were tuned several times, resulting as tougher campaign to Jolla than expected.

In October 2015 Jolla finally delivered the first 121 tablets, a small batch for testing their delivery infrastructure. About 70 of already invited contributors were still left on hold, some already having paid the tax too.


"These will be shipped as soon as possible," promises Lassila.

In November Jolla run into serious financial difficulties as its financial round got delayed, finally forced to temporary lay off a big part of their employees and filing for debt restructuring in The Court. The campaign was totally frozen.

Financial situation got better in December when a reliefe on debts was granted by The Court, and Jolla closed their delayed financial round C. Not perfect, but good enough to keep up with the software development and call part of the crew back on board. Meanwhile In China, there was a 2nd batch waiting - a load of tablets already produced but left unpaid.


"The manufacturer has placed these already produced tablets, a rather small batch, under forward sales due to delayed payments - since that, we do not have any official status with them," Lassila clears out.

Now that the financial situation allowed, Jolla could buy back 540 devices from the manufacturer. The factory had already started forwarding these tablets to other retailers.


"They are precisely from this batch. Some of the devices had already been sold forward, and for this we have not been able to do anything anymore. Unfortunately we can't get the rest back. We asked for a repurchase of these devices from the manufacturer, but this was no longer possible because the equipment had already been sold," Lassila tells us.

The Saifish OS community soon found out that Jolla Tablets are sold elsewhere with both Sailfish OS and Android operating systems installed. Retailers are selling both models for example via Taobao. According to Lassila, Jolla have no facts about this but they will examine it further:


"These devices are initially ordered by Jolla, but there are no guarantees if the devices are now similar or not," stresses Lassila.

Jolla worked to get these back, but Lassila tells that Jolla has no agreements directly with the retailers. This also means that these tablets do not have official support. Even access to Jolla Store and system updates is unsure:


"This depends a lot on what changes have been made to these tablets. They are not ours, so we can not comment any further. Officially these devices do not support Jolla Store or updates, as they are not sold through official channels," says Lassila.

For a small foreign company playing in the huge markets of China the situation is difficult. Meanwhile, Jolla hopes that their customers would use only official partners.

On the future of the Indiegogo campaign, a total of 661 first contributors can expect to receive a Jolla Tablet (121 delivered, 74 invited, 466 new invites). For all the rest Jolla has promised a refund in two parts (note: FAQ updated), half issued starting on February 2016, another half latest on January 2017 with a reservation that Jolla's financial situation allows that.

On the future of markets in China, Lassila had not much to share right now. China is still a part of Jolla's BRICS strategy, on which Lassila shares that things are currently going well in India, and he's also happy about the strong political interest towards Sailfish OS elsewhere.

More on the BRICS strategy