New Intex smartphone will be unveiled on Thursday, July 16th 2015. Sailfish OS is a mobile operating system designed by Jolla, company in Finland.

The name of the new model should be unveiled as Intex Aqua Fish, specs are expected to be revealed tomorrow in Shanghai. Photos shared are taken of a reference device, not the actual device to be unveiled.

Intex representative has already revealed that the smartphone is powered by a Qualcomm Snapdragon 600 series processor and supports 4G/ LTE. The phone will be available in the Indian market in the coming months, some sources mentioning availability for October 2015.

Intex's Sailfish OS 2.0-powered smartphone will be priced around Rs. 15.000, the representative added, [EUR 215] even though he cited that adjustments could be made to the cost before launch day


Sailfish OS 2.0 by Jolla is configured for Qualcomm Snapdragon 200/600 and 800 models in phones and supports 4G/LTE frequencies. Jolla mentions wide range of manufacturing partners, and Intex was the first one to come out demoing a smartphone

What remains to be seen too, looking at the side profile of Intex demo device, is if Intex is adopting Jolla's TOH (The Other Half smartcover) on their phone? Or are we actually looking at a Jolla Phone now wrapped in Intex covers, just demoing the next version of the upcoming operating system? 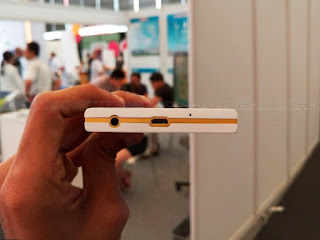 And what does has Jolla to say at this point? Well, we'll need to wait just for tomorrow:

Note: Photos shared by several sources are clearly indicating we're looking at a prototype/reference/demo device here (demo purpose only). Sources at Intex confirmed to digit.in that the device that was in the demo area is not the actual device, and the original device, that will probably be unveiled tomorrow, will be "more premium"