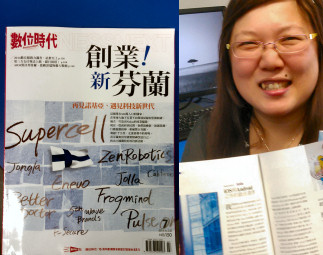 March 5, 2015, Mobile World Congress, Barcelona: This is the last part of a video interview trilogy on theme "Community Marketing". We started a discussion with Carol Chen about a company as part of it's own community, went on with Juhani Lassila on branding, and now we try to bring this into final with another discussion with Carol. Watch all three to get into the big picture - is B2C changing to P2P ?

Jolla is still a startup, but they have an unique strength in marketing. How does it work? Carol shares some personal feelings on her work between the two parties she love - the company and the community. Business to Consumer marketing might not be the best way to conquer the world - Jolla has another ace in use. The people - to people

About this video trilogy

The aim of my three interviews on this topic is to provide an insight to a new way of business thinking, "People Powered" as Jolla puts it, powering up the company with both people working there, 3rd party developers, Jolla's customers, and maybe even their partners in the future. The trilogy:

Jolla is a start up company from Finland, providing independent Sailfish OS mobile operating system. The OS is based on open source Mer project, and has a strong history in Nokia's Meego operating system introduced on Nokia N9. Sailfish OS is struggling for a position between Android and iOs as an European operating system, offering better one hand usability and more user privacy. Jolla has also manufactured two mobile devices: Jolla Phone, sold since November 2013, and Jolla Tablet, expected to start delivering on May 2015.