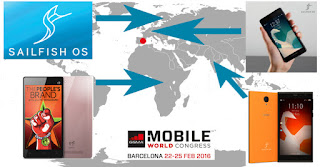 #MWC16 around the world with Sailfish OS

Intex Technologies, the 2nd biggest mobile phone manufacturer in India, has picked Jolla's Sailfish OS for their future Aqua series smartphone Intex Aqua Fish. Intex is launching this phone to the markets in india via Snapdeal on April 2016 according to press release by Jolla. So in just two months from now, the world will experience the first ever Sailfish OS licenced smartphone, looking like Jolla Phone 2 by its design. You can find the full specs of the phone here.

As the operating system will include a previously unseen concept for integrating premium locally relevant content directly into the smart phone’s user interface, I'm sharing a post concentrated on that in a few days. In the meanwhile, here's what this is about, in a business point of view.

Jolla announced a new partnership to its Sailfish Africa mobile ecosystem: Jolla and mi-Fone, an African Mobile Devices brand estabilished 2008. The first mi-Fone device powered by Sailfish OS is expected to hit selected African markets by the end of June, 2016.

Jolla plans to integrate the leading banks, e-commerce platform and other services into Sailfish OS, tailoring it for local customers needs in Africa.

We have very few readers from Africa, but please comment if you're interested on more news on this partnership. Sailfish Africa was first announced on May 2015 after the first partnership with TN Mobile on March 2015.

During the time of porting Sailfish OS on Fairphone 2 [RECOMMENDED READ], Jolla and Fairphone found out some common values like the community involvement and the transparency in both software and hardware development. Now, Jolla and Fairphone are evaluating steps towards enabling also the commercial services of Sailfish OS to those Fairphone customers who would like to pick Sailfish OS instead of the current custom Android 5.1 as their Fairphone 2 operating system. The interest towards this is quite huge especially on the Sailfish OS community, eagerly waiting an up to date device for European markets.

I'm happy to share that I'll update you with another dedicated post on this topic in just few days. A nice heads up: Android apps have already been seen running on Sailfish OS on Fairphone 2.

I was actually expecting more regarding Russia, as my unofficial sources have revealed a big company hiring hundred of Sailfish OS developers (rumor at this point), but Jolla was pretty silent on this country for now. Antti Saarnio did share that Jolla has a very close relationship with the management focusing on Russia's own platform (OS) construction, and also that Jolla hopes the Sailfish community to grow in Russia. So something, but nothing quite concrete yet.
Additionally, Sailfish OS community ports on Nexus5 and OnePlus One were showed, but with no new updates to what we already know by now.

Jolla's customers were also expecting an update on Jolla Tablet deliveries, 540 of them promised to be shipped in February. There are still three working days, maybe they'll do? Well, in both bad and good, for more updates from MWC16 follow this page