[follow up] Promise on Sailfish OS in Salocon Valley 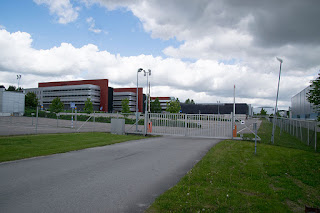 ...with questionable information in the Finnish press. Updated on April 19, 2016

Earlier, we shared a warning to our readers to keep some distance with any possible upcoming financing campaigns for a promised new Sailfish OS Turing Phone to be manufactured in Salo, Finland (image). The local newspapers are positive on TRI's future plans, but some of the national ones have found reasons for skeptic posts too.

This is a followup post for "Promise on Sailfish OS Turing Phone by TRI" (Turing Robotic Industries). The original post was published on February 26th and updated on April 7th, 2016. Our followup collects related news published in Finland via the following sources:


April 19, 2016 YLE published news sharing that according to TRI, the production has started. Few picks translated from Finnish:

EDITORIAL: In my knowledge, this is the 3rd production stage this company and its predecessor (QSAlpha) has informed about, previous one being quite similar on August 2015 (Turing Phone) and the one before that about stopping production in 2014 (Quasar Alpha IV). Click the image to enlarge.

February 26, 2016 YLE corrected the amount of employees to about 300, sharing also the following quoting Steve Chao, the CEO of TRI:

"Recruiting the employees has already started, tells Mr. Chao. For example an operative leader has already been hired to the company"

"I can't reveal the name yet, but a former Nokia employee is in question," Chao tells. (translated from Finnish, source)


Editorial: However, the new TRI "office" still has its address only in a lawyer office in Helsinki and the company has not been registered to the employer register in Finland by today. This makes the above a bit questionable.

The article additionally updates the expected prize of Turing Phone from $600 to above $1000, depending on the amount of memory and the selected covers.

On Digitoday's other article also dated to April 7, they update TRI's expected amount of employees to "much lower than the earlier estimates" of 270 (and even earlier 3000). Mr. Chao shares that less than 20 employees are already hired, and more will be hired depending on the orders of the upcoming phone. According to this article TRI is currently negotiating with retailers in China, India, Middle East and Europe.

On a 3rd article, Digitoday had an interview with Antti Rantakokko, The Mayor of Salo, Finland. He wasn't disappointed on the new estimations on the amount of employees. He said it's "now on more realistic base", and he's happy that the upcoming production attracts other new businesses into the area of Salo. On financing, Mr. Rantakokko shared that the discussions have recently started. According to him, due to closed mobile phone manufacturing in Salo [ed.note: earlier Nokia and Microsoft production site] new companies have an access to "normal business financing" and to globalization funding via European Union.

Editorial: In some earlier news elsewhere, Mr. Chao told that TRI already has a deal with China Mobile on distribution. On the prize, seems a bit high for a product with 2014 main chip (Snapdragon 801), and those covers are a question mark after a trademark carrying the name was abandoned. While listening the video interview above, reading the news on the amount of employees and reading the update by SSS below, it seems that Turing Phone has pretty ambitious plans pushing out phones from the factory in just six weeks after leasing the facility -with less than 20 employees. Or what do you think?


On March 2, 2016 SSS had an interview with CEO Steve Chao via a phone call to Peking, sharing more:


"Turing Robotic Industries Oy will recruit in public in May, tells Steve Chao, CEO of the company"

"According to Chao, the company hires employees already before May without a public recruiting process. He tells he received a lot of applications when TRI entering in Salo was shared in the news." (translated from Finnish, source)

Meanwhile on the other national news, Turun Sanomat, one of the oldest papers in Finland shared a more skeptical news analysis. Unfortunately the article is paid content so I can't quote more from there, but already in the summary:


"Turing is, in the light of past actions, a full question mark."

Uusi Suomi, one of the older news giants here as well shared the connection to QSAlpha which was also mentioned in our earlier post. In general, comments by Finnish readers in the most of the shared news has been wishful but skeptic.

Following up also the trademark issue mentioned in our earlier post, the application was abandoned while TRI didn't clarify the commercial use of liquidmorphium as requested by the Patent and Trademark Office in US in the given time of six months.

In the meanwhile, Jolla has kept full radio silence in their official channels - a wise decision, if you ask me. Juhani Lassila, Head of Communication at Jolla shared to us on February 15, 2016 that an agreement for licensing Sailfish OS to TRI is ready, but it was still missing signatures and the acceptance of the board. Mr. Chao visited Salo, Finland in the beginning of April 2016 and according to him the licencing of Sailfish OS is now in place.


Editorial, wrapping up all these news:

TRI possibly hiring employees in Salo is big news to the city even if the amount of them would be smaller, as the unemployment rate in the city is currently pretty high after Microsoft left the building.

For me it's quite understandable that the local papers are eagerly sharing such news a positive way, but the news shared via the main national news channel YLE [having a governmental leader board] were bit more surprising to me. Smells a bit fishy, especially as none of their journalists have so far checked the company history, like what was done in those two other national papers.

I remain skeptic on seeing any phones manufactured yet in April, as promised by TRI, and even yet in May 15th as later postponed.

I advice our readers to read any Finnish news on the topic with some grain and salt, as some of them seems to be overly positive on the possible upcoming phone manufacturing in the big, empty factory Salo. Finland. Still, let's give this a chance. Maybe something will be manufactured in the "Salocon Valley" one day.


This post was a follow up to
"Promise on Sailfish OS on Turing Phone by TRI" (updated on April 7, 2016)