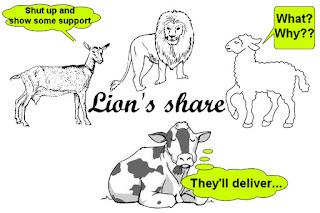 How much is that?


The "unlike" cover image tries to represent current attitudes while new and old Sailors are waiting for their precious tablets. There sure are other opinions as well, but this story only has four animals.

Four animals, a lion, a cow, a goat and a sheep looted some hand knitted tablets, sailing together in the Great Sea of Indiegogo. Having some tens looted on August in the great year of 1501, the lion said:


"I take the first portion because of my title, since I am addressed as a Captain"

They looted some more, some hundreds maybe. Time had passed and it was already October. It was a time to share another portion. The lion said:


"The second portion you will assign to me, since I’m your partner"

Later on November, sheep's eyes hurting for gazing the boats, goats antlers hurting for months of stepping on the deck, but they had a loot to share again. It was quite late night, some rain too, and nobody actually saw how many tablets there were. Whatever the amount, the lion said:


"Then because I am the stronger, the third will follow me"

It became December, and even the Poseidon seemed to be on their side. Cow... she would have probably never stopped looting more, but the hold really got full. A full load of tablets looted, thousands to be shared. The lion said:


"An accident will happen to anyone who touches the fourth”

The end of story.

The reality might be different, have an exciting waiting period! And we didn't hurt any animals, unlike several versions of this story:


But what makes this story worth sharing at all? It's an old moral lesson of joining into something with mightier partners. Crowdfunded campaign participant is not an "investor" neither a "customer", he/she is a "contributor" giving something for an idea, just hopefully, but not necessarily, getting something back. The risk is included in the price, one can't drop it.

If it happens that the end result is positive, smaller partners might be quite proud of what they did. If not, they knew about this risk.

Meanwhile, the mighty partner makes all the decisions. The one don't need to ask in advance: "Hey, if we're half a year late, how would you like us to handle it?". Instead all the other participants are to wait and see while the one makes the decisions, hopefully the best ones available, and shares as much as the one sees worth it.

Now what is the best attitude in such a partnership? Does it affect to the end result if there are 10 000 sheeps, cows or goats? Which animal would you be? Oh, and does the attitude of the lion matter? 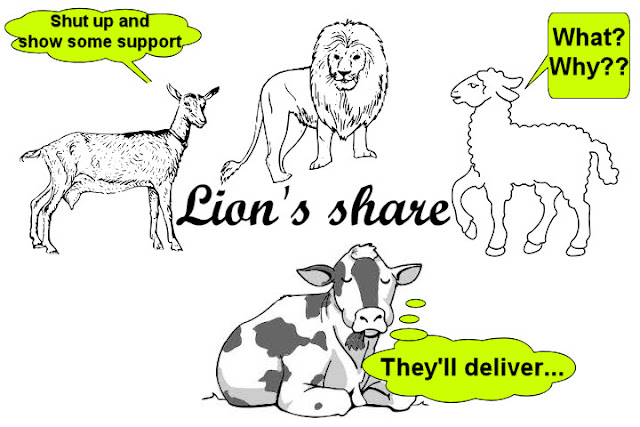