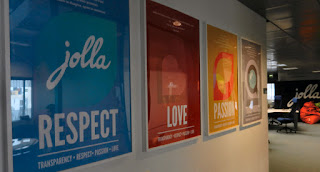 Summarizing a very interesting community meeting and a later press release by Jolla. Antti Saarnio, Head of Jolla, shares positive news on Jolla's financial situation. Juhani Lassila, Head of Communication, shares us some more details on both the meeting outcome and the press release.

After the bad news on November (lay offs, debt restructuring) community people around Jolla and Sailfish OS had a huge load of questions. One of the sailors came up with an idea to invite the captain into a meeting held on IRC platform. Antti Saarnio gladly accepted the invitation and joined the community. Let's start with a detailed summary of the meeting. I've edited parts of the conversations for easier reading, the full log is available here.


Saarnio: "Ok, Thank you. And thanks for inviting me here. I have quite good news, some of those I can share today, but as we need to inform media and community and customers on equal bases, most of the information will come tomorrow. We are just preparing a blog update to be sent out tomorrow, where most of the new information will be. So here are the news :)"


Saarnio: "We have received financing to continue Sailfish OS development from our investors. THIS means that reports about Jolla's death are greatly exaggerated :)"

<c-la> by what time should we expect the news to be out?
<JoshStrobl> will details about the financing be available in the blog tomorrow?
<tortoisedoc> no funds to complete tablets yet?
<c-la> so, will the laid off staff be hired back full time?


Saarnio: "Its early to share details about the financing yet, and might be that we can't share all because of confidentiality matter. But we will share what we can. This financing troubles have of course impacted the company and we need to repair the ship, but most important thing is that Sailfish OS work will continue"

<nodevel> Congrats! Does it affect tablets as well, or just SailfishOS?
<cybette> could you comment on the delivery of Jolla Tablets, or it's too early in the process to say for now?


"About tablets then. We only got the financing confirmed yesterday, and we are now busy analysing different alternatives what to do with TabletGate. We will have a board meeting after Christmas which is to decide between alternatives."


Antti Saarnio: "Options are: refunding or to continue with tablets, but then even more delays are to be expected. It's a tough call."

<pavi> Could we know something about the Intex deal and when would the new phone come out in India?


Antti Saarnio: "Intex project will continue, we have confirmed that yesterday and there will be new Sailfish phone coming."

<pdanek> Does it mean that Intex project was frozen for few weeks due to financing issues? So it will continue now, but with some delay to original plan?
<dr_gogeta86> With this round ... how much will last ?


Antti Saarnio: "The financing is solid, but we are still very tight. Important is that big partners are starting to support us in China, India and Russia"

<JoshStrobl> Any comments on the alleged Jolla Tablets being available on third-party marketplaces?
<c-la> and laid off staff?
<r0kk3rz> There were some reports of Jolla Tablets surfacing on TaoBao being sold with Android 4.4. Can you comment on this?
<coderus> Was tablets produced and stuck on factory/warehouse?
<TylerTemp> There are two kinds of Jolla tablet on Taobao, one is Android-pre-installed, one is Sailfish OS pre-installed. Any info about this? The salers all says it's from factory
<coderus> TylerTemp: android tablet is more likely black Aigo X86, sailfishos tablet should be confirmed first.


Antti Saarnio:  "yes, nothing to do with Jolla, but it seems that our production partner from China started selling some tables which were already produced and in their stock. We are discussing with them that they would stop sales immediately"

<daitheflu> Ok, I propose to officially rename AnttiSaarnio to Santa Saarnio
<coderus> So, tablets really exists? Is there any option to pay extra to actually receive our tablets?
<r0kk3rz> Given that the hardware partner is doing this without jollas permission, isnt there a legal problem with them selling jolla branded hardware?
<cybette> Please share any last thoughts in the next minute :)

<Tofe> If tomorrow's blog post could contain some statement about open-sourcing status (has it been discussed, what timeline to expect, etc), that would be great.
<dirkvl> Noting about jolla adventures?
<wazd> Nothing specific about Jolla Adventures? It's kinda important for us


Antti Saarnio: "Will come back to Jolla Adventures on other time, ok "


Antti Saarnio: "Thank you all for trusting and supporting us! "

<cybette> big thanks to AnttiSaarnio and let's move to next topic!


Today, a day after the meeting above, Jolla released also a press release on the financial news.  Jolla has secured their financing via closing financing round for series C for December. New investment enables further development of Sailfish OS - but for how long?


Antti Saarnio comments: "A very important part in a start-up’s journey is going through death valleys. Most start-ups need great survival skills and determination and innovative solutions to succeed in the long run. Jolla has now successfully completed its investment round and is ready to continue to provide a true mobile OS alternative to the world. This latest death valley was the most difficult one but proved that highly motivated teams can win even when faced with seemingly insurmountable challenges."

"The mobile OS landscape is currently going through a very interesting phase. While many OS projects are fading, the need for alternative OS’s is strong. Without personal data privacy and security, it is hard to see that people, companies and governments could trust all their business, financial and personal information on mobile. We stand firm in the belief that the world needs an alternative mobile OS," Saarnio continues.

Juhani Lassila adds that "The agreed investment is part of a larger deal which is still under discussion. This funding secures the very near future for the company's operations."

A change in model


As part of adapting into the new situation, Jolla's partners are now to take some responsibility of R&D for local markets while Jolla focuses on the core and updates on their software:


"So far Jolla as a start-up has been solely carrying the high investment cost of the Sailfish operating system. It has been very challenging to finance this operation. We are now moving into a model where our partners in the BRICS countries, especially in Russia, India and China, will invest in the R&D of local market operations, while Jolla will focus more on the development of the core of Sailfish OS, producing Sailfish software releases, and supporting its licensees & app developers. Further licensing deals will be announced soon," Antti Saarnio continues.


Series C financing wasn't yet enough to update the shipping status from "frozen", but it does add hope to the project. A board meeting for alternatives takes place already by the end of the year which might bring an update to the current status.


According to Lassila, "This is a business decision, based on a number of different variables, and how the decisions affect the future Jolla."

There are 12 000 backers and customers waiting for their tablets, while only few hundred 64GB models have been delivered. Few more 32GB models have been produced, and Jolla is currently in contact with the manufacturing partner on their status. The partner started to sell this stock in China, Jolla had nothing to do with that, but the discussion is going on.

For IGG backers, the next update on status could be expected soon:


"There will be more concrete measures by the end of the year," adds Lassila

"Now that the immediate financing challenge is resolved we will put our attention to the tablet project and develop a plan for dealing with it. All of your cases will be dealt with as soon as we have the plan ready to be implemented. So hang in there, the answers are coming.", adds Antti Saarnio on the Jolla blog.


In the meanwhile, a poll on Twitter shows interesting result on what does the backers currently wish for the meeting outcome:

Question for #Jolla #Tablet backers: Which one you prefer? @JollaHQ about to decide between these after Christmas
— Review Jolla (@reviewjolla) December 17, 2015


Collaboration with the community


RJ: How has the captain's participation in community meeting attracted Jolla?


Lassila: "Very positive experience, and certainly Antti (and I) will participate again!"

RJ: So the management will continue to participate in similar meetings?


Lassila: "Absolutely. Obviously can't promise particiption in all the meetings, but yes for those whenever there's important stuff to tell you."

Could Antti's participation be seen as a sign of desire for a more open interaction with the community?


Lassila: "Well, we've tried to be open all the time, whenever it may not always seem like that from the community point of view. However, we strive to that continuously."

The last time we discussed, you shared that Sailfish OS 2.0.1 is about to reach Early Access stage. What's coming up?


Lassila: "The update is coming in the beginning of next week, so you'll know by then. There's been quite a bunch of bugfixing, so it should bring more stability."


Thanks for these word, Juhani Lassila. Sail on, for long!