Get your tickets to Company Rock 2015 Finals

They were rocking hard on stage in Company Rock 2015 Semi-finals at Apollo Live club, Helsinki, tonight. Join the Finals on October 30th and go with the feeling when they'll rock even harder!

Let's start with a nice surprise. If you can get your ass to Helsinki, Finland on October 30th, here's your chance. I have few tickets to share to the Company Rock 2015 Finals (link to event page). Rules on this giveaway can be found right below this form:

The rules are short:


This giveaway is anonymous, and does not require any likes/follows anywhere. The names of the winners are not published at any point, only their best wishes are.

The winners: Few of the best wishes, selected by us, are published after the giveaway ends. Even we don't know who wrote them at that point. Their authors are informed to contact us via email

The prizes: Winners will receive 1 or 2 tickets to the Company Rock Finals 2015. Tickets are worth 17€ each, and a few were sponsored to us by Company Rock organization.

Participants: Almost everybody, even Sailors at Jolla, may participate. The only restriction are: You must be over 18 years old. You may not be performing as a member of any band on Company Rock events. You may not be employee of Company Rock team or Apollo Live Club. Oh... and you must get your ass to Helsinki on this time:

Schedule: Contest ends on October 15th, 2015 (midnight, Finnish time) so that we have good time to contact the winners and deliver the tickets

Jolla Cruise Band made it to the Finals on semi-finals 1st round, and they were rocking hard! These 5 rock bands are advancing to the Finals:

These 5 Rockn' great bands made it to the Finals from the 2nd semi-final round:

11th finalist, rocking on stage on Company Rock Finals is Snus from Journalistirock -contest. The winner (band called MediaUnited) couldn't make it this time, so Snus is taking their place. Here's a complete list of the Finalists:

Join the Rockn' great evening with them on:

It begins in the spring with early qualifiers. Semi-finals takes place on fall, and soon after it becomes clear who will take the coveted victory. Over the years, hundreds of bands representing companies in various sectors have been involved into Company Rock.


"Godparents cooperation will enable a new kind of fund-raising in favor of the health and well-being of children. One of the most mind-boggling competition awards will be an annual occurrence at "Give Children a Life" -concert" (Elämä Lapselle konsertti, picture above. A huge event in Finland organized by Children's Hospitals Godparents. This concert is also seen on television.) 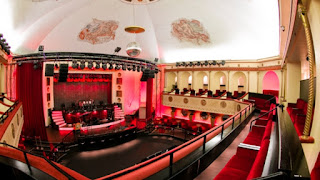 Apollo Live Club (change language on top right) is one great place to spend a night in Helsinki, and not only during events like this. It's been a while since I've been there last, but I can guess it's only gettin' better.

Hope to see you there!