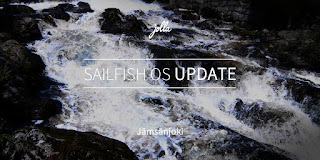 Update: Jolla ceases rollout of this version due to problems with security code in few user cases.

"Roll out ceased on Aug 31 for now due to few problem cases with the security code. We are investigating the issue."

Release notes were edited with above information on this morning, and this additional information was shared a while later:


"Yes we have intentionally stopped the roll out for now. We need to investigate and understand why half a dozen of devices have been requesting the security code after a seemingly successful update although the device lock had not been used previously. A couple of devices even indicate that they are permanently locked. The roll out will continue later. Apologies for the delay."


Also edited was the already known issue about CallRecorder (3rd party OpenRepos app) preventing the update process, leaving Jolla to a state where it only boots to the logo screen. The app must be unistalled before updating the device. This issue was known, but now lifted to top on release notes for more visibility.

Yet, it was found out that not all Jolla C devices can be updated directly from an early OS version (e.g. 2.0.0) to 2.1.1. An intermediate step is needed. This can be done on the command line (Terminal app, developer mode enabled):
End of update. Original article, August 29, 2017:


Some downgrades from changelog

Sailfish OS 2.1.2.x is expected to be released on October 11, 2017. Why we can guess this date already, is because this version is supposed to be released also for Sony Xperia X as a separately sold software image, and the date of this release was shared on last week already. You can find more about this on our page Upcoming

Known issues on the update process

We've kept you up to date with the Finnish lakes and rivers which Jolla is using in their release naming. Jämsänjoki is a river connecting lake Kankarinvesi to lake Päijänne, streaming through city of Jämsä in Southern Finland. The etymology of the name has three different stories:
As we don't know which one is the correct etymology, this leads to a problem with the translation as well. Just picking an easy one, we might call this update as

"The river of the jem's"